Raking Leaves in the Holiday In-Between 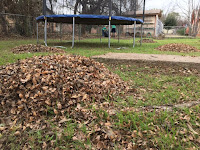 Don’t get me wrong, I have nothing against leaves.  They’re beautiful in all their frond-ish, billowy, colorful grandeur.  I just happen to like them better when they’re still on the trees.

So today, on this typical Texas winter (very unlike actual winter) day after Christmas, I set out to soak up the mid-70s by raking up the wreckage of Spring draped heavily on our struggling yard.  I actually enjoy that annual rake, and this year it’s helping me deal with the gloominess of the Holiday In-Between.

For my whole existence, I’ve carried a kind of subconscious melancholy during those days for some reason.  I was sharing that with my husband this morning, and he said something like, “Really? Huh?” which is a nicer way of saying, “I love you, but you’re kind of weird.”

You see, all while growing up, I would put up a tiny, wilted plastic tree in my bedroom early in every Christmas season.  I even had a whole box of my OWN ornaments that were only to be used on that pitiful tiny tree.  I was all about some Christmas! But once December 26th hit, the tree came down.  Immediately.  For some reason, I couldn’t shake the feeling that it was just time to move on.  As in, a brush-off-your-hands, “Well that’s done.  What’s next?” sort of feeling.  Now, of course, we keep the tree up much longer in our house, and, sure enough, inescapably, the day after Christmas sets that strange limbo in motion in my heart.

I cannot seem to escape it.  I can’t even really describe it.  It’s definitely a sadness . . . well, sort of.

It’s like, from the day after Thanksgiving, all the world is riding this glittery, tinsel-strewn wave into December 25th, a great crescendo of shopping and wrapping and singing and baking and decorating and giving and getting and joy to the world.  A Yuletide explosion of celebration! And then we crash.

And way on the other side of The In-Between, lies a shiny New Year’s Day, which pretty much everyone agrees is the universal signal for a ceremonial do-over; a crisp, white blank sheet of paper, resolutions and new beginnings and excitement of getting up to brush ourselves off and try this thing again.  Head high, we march on, ready and determined.  On mission, y’all!

So I guess I just don’t know how to feel right now or how to spend the days In-Between.  I’m serious, until the New Year dawns (God willing), I will carry an underlying stress, an angst.  It really is weird.  And, just like every year, I will try to talk myself out of it and cover it up with doing and being, but it will still rest its wet blanket on my soul for those few days.

This is the first year I’m really trying to understand why.  God is mysterious, and the way He programs each of us is mysterious.  I’m pretty sure that not everyone feels this way (judging from the husband’s response), so what’s up? What could this signal, and can it (or should it) be fixed?

I’ve got my figurative pen in hand, and I’m trying to sketch out some parallels to eternal truth.  Here’s what I’ve got:  Could this dreary cloud just be a reminder of the greater limbo we live in – the “already and not yet” of God’s Kingdom?  Seems to fit, maybe.  We super cool modern folk exist in the in-between of the culmination of God’s great redemptive plan:  post-Messiah, but pre-All Things New Eternity.

It’s limbo.  And there really is an ache, isn’t there?  And that eternal ache rears its head in the simplest, but most profound of ways.

This Holiday In-Between business is small potatoes compared to the great Story, but maybe it’s a tiny echo of the real longing in the hearts of man.  I’m not sure, but I’ll hold on to that possibility during the next few days.  And, while I’m at it, it’s probably a good idea to pray for joy and meaning and mission while trudging through this and all the other In-Betweens throughout our time.
You know, I really do believe that, if we search for them, we can hear those echoes of eternity lacing their way through our daily grind.  If we listen, if we measure them by the Word and seek for them, I just know we’ll hear some holy whispers bouncing off those mountains, the ones that don’t seem to be moving just yet.

In the In-Betweens, let’s listen.

Posted by Jennifer Hildebrand at 5:18 PM No comments:

Christmas - The Beauty and Bite of Evolution

So much has changed.

Ten years ago, Christmas shopping was both a joy and a misery. Every trip to the store in search of the perfect gift meant prepping and ushering three small, often unwilling, shopping accomplices through the crowded aisles.  That meant diapers and sippy cups for the baby boy, whatever 3-5 stuffed animals little sister was in love with at the time and at least one giant book into which the oldest sister would firmly insert her nose as she bumped into any and everything meandering through the store.

I could anticipate with each outing we would have several big belly laughs and wide-eyed “WOW!”s, quite a few tears and at least one tantrum over who would get the last blue raspberry sucker in Mom’s purse and who would be left to torturously suffer through eating the plain ole grape one. At some point, we would experience multiple small humans wallowing on the floor in the checkout line and copious amounts of parental bribery for extra TV time.

Just a little ole decade later and the landscape looks very different.  I noticed just the other day how I’ve already made quite a few trips out for various Christmas goodies, and I don’t think I have yet been accompanied by even one child person . . . even one time.

Don’t get me wrong, I enjoy being able to focus, secure the package and immediately blow that popsicle stand, but my heart strings are getting sore with the drastic shift in seasons.  The three don’t usually all go shop with me now.  In reality, they are seldom even at home for any extended period of time at the same time during this busy season.  Between choir rehearsals, band rehearsals, musical rehearsals and performances based on all of the prior (guess that’s what I get for having artsy-fartsy kids), the husband and I often find ourselves with only part of the herd in the pasture – sometimes maybe not even one cute little calf to keep the old bovine folks company.

They’re growing up and getting out.  Christmas makes those transitions show through like wrinkles on the forehead.  The lines tell of time and of evolution.  And they can’t be hidden.  Also, they tick me off.

And so we are left to concentrate our efforts.  The traditions that once were a given are now an intentional goal.  We’ve been collectively scouring the calendar, looking to pull the “all-stop” and carve out some time for the annual cookie decorating competition or driving around in our PJs to look at lights while we drink hot cocoa or milkshakes, depending on what Texas weather we get on that particular day.  It’s not lost on me that we have one child sadly counting down how many “kid” Christmases she has before adulthood.  Darn it all, every one of them needs to count.  And it should, right?  Because, time progression aside, we’ve learned firsthand how life can take an unexpected and grievous turn.  Not one of us is guaranteed another raising of the big plastic pseudo-tree.  Whatever the season looks like, every Christmas WILL count.

I’m grateful that our crew is learning (I hope) to place a premium on our time together even more than on the gifts.  Money is a nonessential for a truly beautiful memory. These goofballs just want to sit around at home and write silly carols, jump on the trampoline in their pajamas, watch “A Christmas Story” beside the tree lights.  They are hurting for our yearly family Advent devotionals, which we have been sorely lax in this year, and for sibling sleepovers and giggling by the tree on Christmas Eve.

These sacred rhythms and traditions out-sparkle the glittery-est of packages. Lord, help us breathe in the blessing.

I’d be good to throw out those shopping lists and create a more sacred to-do list:  more time for traditions new and old, the reprise of this beautiful rhythm, the holy remembrances, to make every year ‘round the tree joyful and triumphant, a new and unique verse in our symphony.

So in the big tick-tock of this season, here’s to all of the evolving seasons in our families:  to growing-up babies and crying babies, to shopping trips full or solo, to sad old cow couples sitting on the couch watching Netflix while the calves are all out tending to their own adventures, to quiet moments where the hum of the Spirit hugs all of our pieces into peace.  And most importantly, here’s to that one Baby that was born and was loved and grew up and left home and loved and suffered . . .

Posted by Jennifer Hildebrand at 6:41 PM No comments:

Autumn Trees and the Church of Ages

This tree caught my eye this morning. Pretty. For some reason, it immediately reminded me of the multi-generational essence of the Bride, all the colors living together. In such a youth-driven culture (no offense, young folk), what a beautiful picture is the Church -- learning and teaching and growing and encouraging one another, all ages combining to paint a beautiful picture. And how crucial it is that we maintain that intermingling today to His glory.

(Also, I just wrapped up the November poem-a-day challenge, so that's where my comprehension skills are living right now. Here ya go. First draft, so be understanding.) 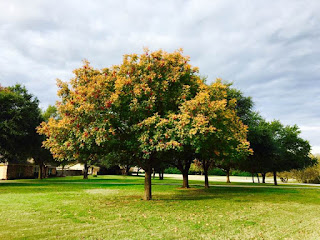 The Autumn Beauty of the Bride

Stories are told in the yellowing fronds
in the thick of advancing transition
but tested and stayed, that fire has spawned
stability

Oh, the Bride, she carries her colors well
and the Groom’s eye catches the compliment
for ‘tis the blushes of hues intertwined that express best
her radiance
Posted by Jennifer Hildebrand at 1:05 PM No comments: