Scars (and a Rabbit Hole)

How often do you think about your scars?  Well, it's not necessarily polite dinner conversation, but we've all got a few, I'm sure, and some stories to go with them.

My son has one on his chin that he got when he was four years old and decided it would be a good idea to “power slide” on his belly across a concrete gym floor. I've got a few permanent marks on my knees from bike wrecks as a kid and a few more from a surgery in college to repair a torn muscle. In fact, I've got a big scar that traces the outline of my entire spine, because, even though I truly am “fearfully and wonderfully made” (Psalm 139), I was also unique in that my spine was “crooked as a question mark” (the great Forrest Gump) and needed straightening out during my teen years – as did my attitude during that same time, by the way.

It's all just part of being human, I guess. But in looking to the future, I've always assumed that in heaven there would be no scars. You know, “no tears, no sickness,” etc. I always figured that our injurious disfigurements would fall into those categories, but now I'm not so sure.

Case in point: when Jesus was resurrected, triumphed over death, and appeared to the disciples, he did, in fact, offer his scars as evidence of his identity. His body was renewed, but the wounds were still there. Poor ole Thomas gained his discouraging nickname by demanding to see and touch the scars in Jesus' hands and side before he would believe. The continuance of the scars is part of the Gospel story.

As a disclaimer, let me say that I am by no means an expert theologian when it comes to end-time events and the details of our next life, but I'm just wondering and wandering down this little rabbit hole, so I thought I'd invite you along . . .

What if what we deem with our earthly eyes to be ugly scars, God sees in truth as holy landmarks on our journey here. Like literal “plot points” on our person or markers in each of our stories, rather than something hideous to be rid of.  And perhaps they're more permanent and hold more significance than we can even imagine right now.

Jesus' scars in his resurrected body demonstrated not only that he was indeed who he claimed to be, but they also proclaimed the greatness of what God had done in the death and resurrection of the Messiah. The scars were a testimony.  His flesh was ripped and gaping, his human life faded away with a few shallow breaths, and it hurt, it really hurt!  But now – now he had been brought beyond all that by the power and plan of the Father. He had stepped into a new existence, an eternal one. But he still carried the scars of his earthly journey as a necessary testimony to the power of the Almighty God!

I think of our Christian brothers and sisters in foreign lands, some here in the states even, who literally carry the scars of Christ on their bodies. They understand better than most what it is to suffer for holding to their faith in the one true God, and they have the marks to prove it. Those injuries certainly live as a testimony! But go beyond the physical and think of the emotional and psychological, the unseen scars that you and I bear. The injury is healed, perhaps, but the scars remain in the corners of our minds and hearts as a fresh reminder of where we've been and how much it hurt. But hopefully those scars also stand as testimony to the power of God and His relentless pursuit and redemption of His creation (i.e. “you and me”!), and thus, they are beautiful.  They exhibit to the world the healing, saving power of the Creator that lives in you and in me.

I, myself, have numerous physical scars that tell about my life – nothing movie-worthy, I'm afraid, but they do color my story. The unseen scars, however, are just as real and usually remain tender to the touch. Will those marks carry over into eternity?  I'm not sure. But if they do, I hope that both now and later they serve the same purpose as the wounds in my Savior's hands and side – to testify to the magnificence of God and the extravagance of His love for a broken world and a helpless one like me.

So perhaps we shouldn't take such care to cover up our scars. Maybe we should share them more openly and embrace the fact that they tell the tale God is writing with our own flesh and blood until the day we meet perfection (however that looks) in eternity. May He help us revel in the uniqueness of our “life-marks”. I desperately want mine to tell a good story.
Posted by Jennifer Hildebrand at 12:13 PM No comments:

Around our house, we generally follow one rule for updating essential (read "not creative, cutesy, or crafty") items in our home:

Wait until it's REALLY broken, then figure out a way to fix it.

I like doing the fun stuff of home-makeover-ing -- not the necessities.  But the other day when my son's dresser pulls broke for the fiftieth time, I figured it was time for a cheap update.  So off to Lowe's we went to convince a six-year-old how cool it would be to pick the $1.27 handles to put on his only big piece of furniture.  For some reason, he was picky about it -- he actually wanted some sort of Wild Kratts inspired jungle-motif wild animal handles, but, alas, we did what we could and bought what actually existed.

The old oak dresser in his room has seen many homes.  It's an old hand-me-down piece that originated in my grandparents' house in Mt. Holly, Arkansas many years ago.  It was later gifted to my folks and lived in their master bedroom for years before making its home in my room during my teen years.  So I couldn't help but reminisce a little as I carefully removed each broken brass drawer pull.  I remembered stashing boxes of notes and letters from our school days in those top drawers alongside VHS tapes of my favorite MTV shows.  I remembered the multitude of  cheerleading and prom photos that topped that dresser right beside my black and gold homecoming corsages.

Little flecks of memories came chipping off those rusted screws. 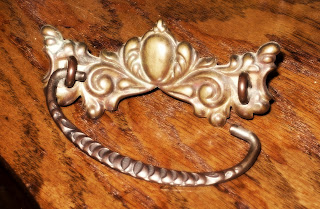 And what had come before my own memories?  Candles and family photos, hand-crocheted bedspreads dripping with history, love notes and maternity clothes and papers from my grandfather's stint in World War II, graduation caps and awards papers and my own baby clothes, perhaps.  History.

And behind each weathered brass plate lay the imprint of its life on the wood's face.  A good eighty years of dust existed beneath those ornaments.  Eighty years of life hidden for decades behind a weathered old brass decoration.  These tiny personal building blocks of our history and existence had traveled this life with us, and we didn't even know they were there.

I gently brushed away each little smudge of history as I placed a new sturdier handle in its place.  And just like that, it's footprint was gone. Three generations had touched this old piece of wood, tugged at its handles, stored treasures, lived life, and then moved on.  Today it still stands tall holding precious plastic trinkets and super hero underwear.  Life, as they say, goes on.

God speaks to our hearts in these small things.  With each brushing away of the dust hidden behind those old brass plates, a verse pounded in my head:  "You are a mist that appears for a little while and then vanishes."  (James 4:14)  Their lives, my life:  a mist, a vapor, literally dust in the wind (or on the wood, in this case).  I don't mean this to be a depressing thing, but to emphasize our beautiful, yet tiny part in this big, BIG story that God is still writing.  Those generations before me told a good story.  Now it's my turn.

We continue to step into the next chapter, with hearts full of encouraging memories, anticipation, and promise.  And it's a remarkable promise -- one assuring a future remaking of this little ole dust of our existence.

**And in follow-up to the previous post "Gotta Get a Goal" -- I'm looking forward to sharing my summer writing experience with you.  Details soon.  Hoping these new songs will also tell a good story.  :)

Posted by Jennifer Hildebrand at 2:27 PM No comments:

Gotta Get a Goal

I've finally figured ME out . . . apparently I can't accomplish anything without setting an official goal.

A few months ago, I set out to participate in Blood Water Mission's 40 Days of Water -- spent all of Lent drinking only tap water.  But since then I've gone back to sucking down buckets of Diet Dr. Pepper and sweet tea.  Another case in point:  I just finished eight weeks of training for the recent Mud Run.  We raced last Saturday, and since then, my workout has consisted of watching Parks and Rec on Netflix and consuming large amounts of leftover Easter candy.  It's really just sad.

So I'm getting back on the workout and water wagon, plus setting a goal for the summer.  It's a songwriting goal, and I'm hoping to record and share it during the process.  Summer gets pretty crazy for us around here.  All the kids are out of school, activities abound, and finding some quiet time to get my head clear and write can be a challenge. But, I've recently been inspired by some other artist friends who are fiercely dedicated to honing their craft even in the most chaotic of times.  I want to join their ranks.  Yep, it's time to get a goal!

Do you have a creative goal for the upcoming summer?  Why not share it, too?  Blessings!


Posted by Jennifer Hildebrand at 8:11 PM No comments: